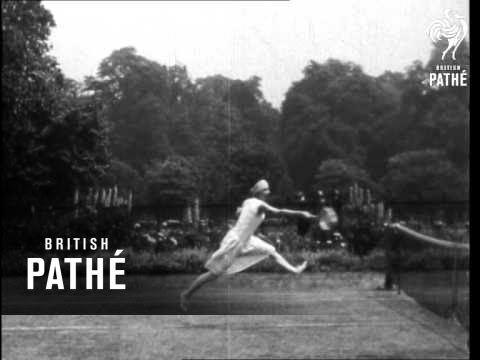 Title states that Verachrome is colour process used – most of the footage is black and white. Views of the spectators – colour. Women’s doubles match in progress. Shot of the crowd moving their heads from side to side watching a match. Mlle Lenglen demonstrates her technique. C/U of her grip. Her service. Slow motion footage of the serve from different angles. Forehand technique in slow motion. Backhand technique. Smash. Volley. etc. Shots of Suzanne playing against Miss Ryan and Miss McKane at Wimbledon. Shots of the audience. Slow motion footage of some of the action. World’s Women’s Singles Championship against Miss Joan Fry. C/U of Lenglen and Fry after the match.

N.B. Although described as stencil colour, this has been transferred as black and white from the Neg – MD.

Note: this is not from the same series as the Dorothy Round material but seems too long for an EVE or PIC item. Title in the style of EVE but intertitles very plain. The print has a safety section at end of nitrate
FILM ID:1645.01