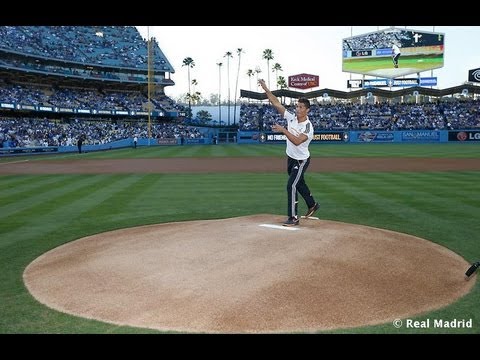 Cristiano Ronaldo was the star of the Major League Baseball regular league match in which the Los Angeles Dodgers faced the New York Yankees. The Real Madrid forward threw the ceremonial first pitch of the game at the Dodger Stadium, where his team will play their second preseason match on Sunday at 02:00. Prior to the honour, he spoke with former Lakers basketball player Magic Johnson and actor Samuel L. Jackson, sent footballs into the public attending the match and was interviewed by local media. His statements were shown live on the stadium screens. Dodgers batter Yaseil Puig, a Cuban player who is America’s latest baseball sensation, acted as master of ceremonies for Ronaldo, offering him a shirt of the local team with the Portuguese forward’s name and the number he usually wears in Real Madrid, and a baseball bat with his signature. In return, Cristiano Ronaldo handed him a football with his signature.