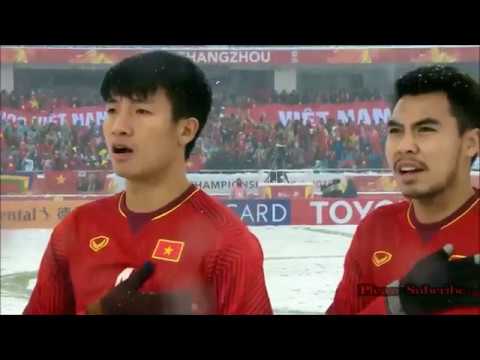 The normally low-profile event has been followed with the fervour of a World Cup final in the Southeast Asian nation following the meteoric rise of the young squad who have united a country with few tastes of sporting glory on the world stage.

The under-23 team was the first Southeast Asian side to reach the final of the Asian Football Confederation (AFC) U23 Championship, blowing past regional heavyweights like Iraq and Qatar.

The streets were flooded with a sea of red and gold as flag-waving fans, many also wearing red headbands that said “Vietnam Wins”, filled parks and public squares to watch the final on big screens.

Uzbekistan struck in extra time to end their hopes of glory with a 2-1 victory over Vietnam on a snowy pitch in Changzhou, China.

Despite the loss, the huge crowd of fans were bursting with national pride as they streamed home, some still chanting “Vietnam the champion!”

“We were proud of our footballers. They really are our champions,” office worker Nguyen Nhat Hoang told AFP, adding that he would name his soon-to-be born son Dung after the team’s goalkeeper.

Throughout the match a cacophony of sounds bellowed through the streets as fans drew on everything from children’s trumpets to metal pans to cheer on the “national heroes” from afar.

“More than 90 million Vietnamese people are behind you, cheering and following your every step,” Prime Minister Nguyen Xuan Phuc told the team before the match.

After the match football commentator Dang Gia Man praised the team for their performance throughout the tournament – and for bringing the nation together like no other sporting event has in recent history.

“We are proud of the team,” he told AFP. “They did a good job in uniting our countrymen.”